K-F/X has been creating special effects for the motion picture and TV industries for more than 40 years. You name the effect and K-F/X can create it, from fire and rain to car flips and explosions. You’ve seen their work in movies like Carlito’s Way, The Departed, The Smurfs and Analyze This, and TV shows like The Deuce, Homeland, Orange Is the New Black, Person of Interest and Boardwalk Empire. Most of their recent work has focused on TV shows shot in New York City.

Dustin Riedman, K-F/X General Manager and Vice President of Operations, has been with the company since 2009. About a year before he arrived, K-F/X had begun phasing out older generation fog and haze machines in favor of Look Solutions products.

The Generational Difference in Fog Machines

“The older machines were bigger, heavier and not very mobile, and they had a lot of different parts and controls that could break easily,” Riedman said. “They weren’t designed for how we use them. We’re constantly moving to different sets – the city, the beach, near a fire, in the woods, in the rain. Look Solutions machines are low-profile, lighter, simpler to control and easier to move.”

Older generation fog and haze machines often used a thicker fluid that wasn’t widely accepted as OSHA-friendly, while Look Solutions water-based fluids have been tested to meet safety standards.
“When we use Look Solutions machines and fluids, we know we don’t have to worry about safety regulations or the health of anyone on set,” Riedman said. “This is especially important with union jobs.”

In this digital, high-definition age, cinematographers typically want a hazy atmosphere that takes the edge off visually. If the scene is too crisp and sharp, it doesn’t appear authentic. Haze creates a somewhat grainy look and adds texture to a film.

“A lot of the scenes in The Deuce were interior bar scenes,” Riedman said. “We used Unique haze machines constantly. Same thing for Boardwalk Empire. We use the Unique on just about every job for interior scenes to create a similar look and feel.”

When shooting outside, K-F/X relies on the Viper fog machine for a wider range of effects. If there’s a car crash, they use the Viper to create the effect of a smoking car. When they’re in the woods, they use it to generate fog.

K-F/X also uses the battery-powered Tiny fog machines every day on set. Because they’re so small and can be controlled remotely, the Tiny fog machines offer a lot of versatility and create options that other machines can’t.

“If we need smoke coming out of a briefcase, we can put the machine in the briefcase, operate it with a remote control while standing off-camera, and there’s your effect,” Riedman said. “The smallest machines are the size of a sunglasses case, maybe smaller. Nobody else makes a product like that.”

The Conversion Is Complete

K-F/X CEO Steve Kirshoff, a two-time Emmy Award winner and five-time nominee, has been creating special effects since the 1970s. He knows a thing or two about fog and haze machine technology of yesterday and today. In 2018, K-F/X only uses Look Solutions machines.

“We probably own close to 50 fog and haze machines from Look Solutions,” Riedman said.

“They check all the boxes. They’re small, light, reliable, easy to control, and safe. We consider Look Solutions to be the gold standard in the industry.” 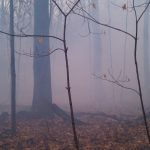 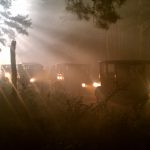 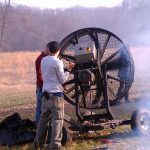