How Fog Brings the Macabre to Beetlejuice on Broadway

Home How Fog Brings the Macabre to Beetlejuice on Broadway

Iiiiit’s showtime!
Beetlejuice on Broadway is the stage adaptation of the iconic 1988 Tim Burton film starring Michael Keaton, Alec Baldwin and Geena Davis. Beetlejuice – The Musical. The Musical. The Musical.) – directed by Alex Timbers (Moulin Rouge!) with Alex Brightman in the title role, brings musical pageantry to the original story of the haunted house battle between the living and dead.

The coordination of costumes, effects, lighting, projections, illusions, slight of hand, and a giant mechanical sandworm create a show within a show – flashy and intense, dark yet hilarious, and wildly entertaining. Look Solutions fog and haze machines are used throughout the Beetlejuice production to capture Tim Burton’s vision and create the precise effect for the audience.

From Tiny Puffs of Smoke to Billowing Clouds of Fog
The Look Solutions Tiny Fogger, which is about the size of a glasses case, is used to simulate a smoking cigarette by the woman in the undead realm. The “smoke,” incidentally, appears to come out of the area where her throat was cut. However, the Tiny Fogger is concealed to make the effect appear real.
Every time there’s a reveal, whether Beetlejuice bursts through a door, a ghost emerges from the floor, or the giant sandworm enters the set, fog is used to make the entrance more dramatic. When Beetlejuice comes through a door, a fog blast creates excitement and helps to elicit a strong reaction from the audience.
In a number of scenes, Look Solutions fog machines are used to immerse the entire stage in a slow fog to create an eerie, spooky effect, with a moonlit sky as a backdrop. Layered elements like fog, projections, and green and purple lighting produce a macabre, unearthly setting well-suited for a supernatural musical.

Check out these videos of Beetlejuice on Broadway to see how fog and haze enhance performances night after night. Of course, nothing beats seeing a Broadway show live and in person, so we encourage you to see Beetlejuice at the Winter Garden Theatre on Broadway!

Want to learn more about Look Solutions fog and haze machines, fluids, and accessories for your theatrical production? Need help choosing the right products? Give us a call at 1-800-426-4189 or email info@lookfog2.com. 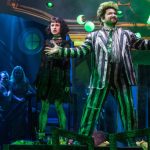 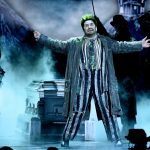 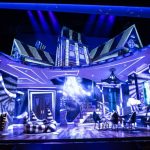 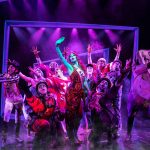 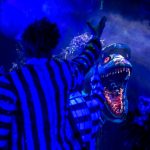