Thaine Morris got his start in the special effects industry in the early 1960s and has been working in motion pictures for most of his life. His resumé speaks for itself.

An Academy Award for Best Technical Achievement in 1988 for developing a pyrotechnic device with David Pier. An Academy Award nomination in 1989 for Best Visual Effects for Die Hard. An epic list of visual and special effects credits that includes two Star Wars movies (The Empire Strikes Back and Return of the Jedi), Ghostbusters, E.T. The Extra-Terrestrial, Raiders of the Lost Ark, 2010 and Poltergeist. 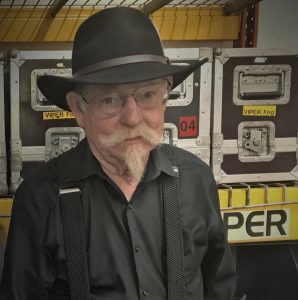 Long story short, Thaine and the crew at Roger George know a thing or two about special effects.

One of the keys to success in the special effects business is knowing the equipment inside and out. Thaine was first introduced to Look Solutions products about 15 years ago.

“Somebody brought me a couple of Look Solutions hazers,” Thaine said. “I took them apart and saw that they were built very well, very solid. I said, ‘We have to find these people and start carrying this stuff.’ That’s how we became a dealership for their equipment.”

Thaine says there are other companies that manufacture much cheaper fog machines, but they’re not nearly as strong or reliable. Some companies make bigger machines that are well-suited for certain purposes but lack versatility

“The Viper fog machine is big enough for most movie sets, and the Unique hazer is the best I’ve seen on the market,” Thaine said. “It’s difficult to find a problem with Look Solutions machines and, believe me, a special effects guy can break a crow bar.”

Roger George Special Effects supplies equipment to special effects technicians, mostly for Hollywood movie productions. With the help of Look Solutions fog and haze machines, they can simulate just about any atmospheric or special effect.

For example, you can’t use cigarette smoke for bar scenes, so you use a hazer to simulate a smoky bar. When a car overheats or you need steam from a locomotive, you use a fog machine to simulate smoke or steam. Thaine also has steam blowers, but if you blow steam and it happens to hit an actor, they could end up in the hospital with second-degree burns.

“When you need an overheating car, you can put the Tiny fog machine under the hood and turn it on with a remote control,” Thaine said. “Actors don’t have to worry about steam hitting them in the face when they jump out of the car and pop open the hood. Look Solutions was the first company to make fog machines with remote controls that actually work, and their battery-powered machines are by far the best on the market.”

If you’ve seen Hollywood movies with smoke, explosions, overheating cars, or even just the steam from a tea kettle, you’ve probably seen special effects created by Look Solutions equipment that came from Roger George Special Effects. Both companies continue to set the standard for special effects expertise and technology in the motion picture industry.

“Ever since I got my hands on that first hazer, we’ve been providing Look Solutions products to the motion picture industry here in southern California,” Thaine said. “They keep a good supply in stock, we keep buying them out, and everybody’s happy. That’s life in the fast lane.”